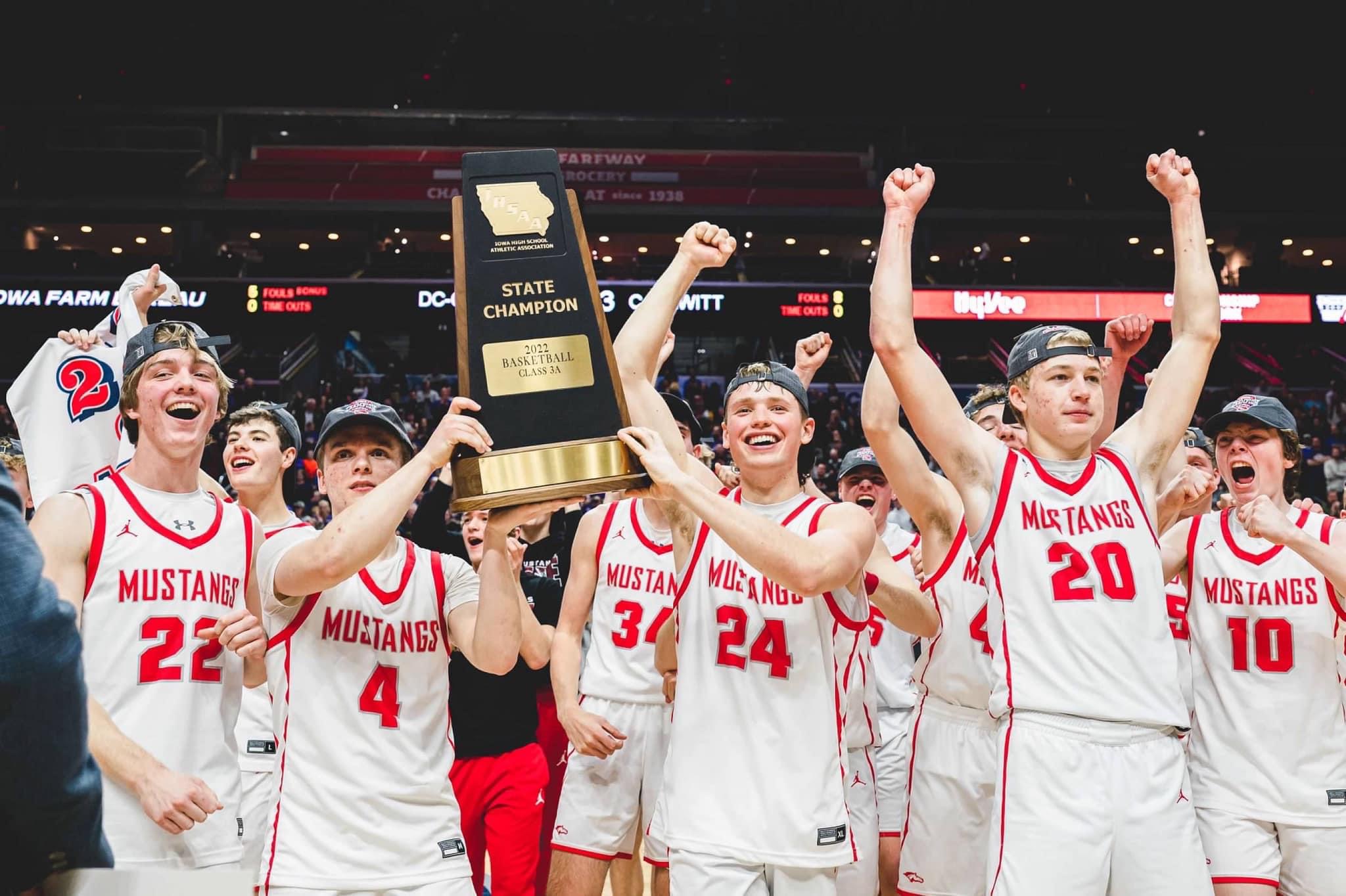 The Mustangs (22-5) have made the state tournament six times in program history, most recently in 2021, but have never won a single game. Central DeWitt (20-7) hadn’t been to the Wells Fargo Arena since 2014, when the Sabers finished second.

It was DCG coming out on top, despite giving up a 12-point lead in the fourth quarter.

“I think we got a little nervous,” head coach Joel Rankin said postgame. “So, obviously, I’m thinking, ‘We’re gonna blow this,’ but I’m trying to stay positive. It crossed my mind that maybe it’s not meant to be.

“We’re not perfect, we make some mistakes. But out heart is big and special, and I knew they’d make that stop at the end. You have to give credit to Central DeWitt. They never quit, played so hard.”

Shawn Gilbert led Central DeWitt with 23 points, six rebounds and four assists. He was named captain of the 3A all-tournament team.

You can’t talk about Dallas Center-Grimes’ postseason play without mentioning 3-pointers, and you can’t mention 3-pointers without bringing up Runyan, Huston and Jackson Jones.

Meanwhile, Glasgow – a Kansas City signee and the Mustangs’ leading scorer – didn’t pick up a single 3-pointer through the first two games of the tournament.

Well, it looks like Runyan and Glasgow were saving those buckets for the game that mattered most, the 3A state championship. Runyan finished with a game-high 31 points. He sank five 3-pointers and went 2-for-2 on free throws to win the game.

“Jacob’s amazing,” Glasgow said. “He’s not always our leading scorer but no one’s ever our leading scorer, really. But he comes out and he has a great game. Just for him to come and play at DCG with us, it’s been awesome.”

Glasgow finished with 10 points and went 2-for-2 on 3-pointers. He recorded a steal with two seconds left on the clock to seal the state title for Dallas Center-Grimes.

“It was awesome,” Glasgow said. “I got the steal, threw it to Jacob. I looked at the clock and saw that it was almost over and knew he was gonna knock them down. So, it was just the best feeling in the world. I could imagine it but I never really dreamed of winning the state championship and we got it done tonight.”

Huston continued his scoring success, going 2-for-2 from deep against Central DeWitt.

Players don’t need to be tall to play basketball, but in Central DeWitt’s case, it certainly helps. When the tallest player in the opposing starting lineup is 6-foot-3, the Sabers’ 6-9 big man Shawn Gilbert is a solid weapon to have in the arsenal.

In the first half, Gilbert picked up seven points and added three assists and two rebounds. He finished the game with a team-high 23 points, including three 3-pointers.

While he does record his fair share of points and rebounds, Gilbert’s presence on the court was enough to disrupt DCG’s offense a bit. All of the Mustangs’ top scorers are 6 or more inches shorter than Gilbert, and it’s not easy to make shots or avoid fouls when going toe-to-toe with that height difference.

But DCG was able to figure it out enough to win the game.

Alyssa Hertel is a college sports recruiting reporter for the Des Moines Register. Contact Alyssa at ahertel@dmreg.com or on Twitter @AlyssaHertel.

Thank you for the following business sponsors